Fienile renovation...the openings have been created

Over the last couple of days Sandro has been shaping the various openings in the upper fienile.

He had previously installed huge wooden beams above each opening in order to support the stonework above and around the spaces. These beams are 3 deep because the stone walls are about half a metre thick. The addition of this wood creates authenticity and complements the house, which also has wooden beams over its windows and doors.

To shape the openings, Sandro has been removing stones.

First he shaped the entry space into the upper level of the fienile. It used to be a narrow opening that we would creep through, careful to watch for a snake, lizard or scorpion that might be lying in wait between the haphazard stones.

Next he removed stones from the end wall of the fienile to make two openings. These will enable us to look out over our plum and hazelnut groves, vegetable garden, gooseberry plot, kiwi vines, strawberry barrel, woodpile and the creek.

Then he removed stones from the back wall of the fienile to make a long opening which will allow air to flow through the space. This will be important given that we plan to use our wood-fired pizza oven and BBQ up there.

After roughly shaping these openings, he hung string lines on each side of them which will guide him as he rebuilds the jagged stonework into even shapes. Then he used a jackhammer to remove patches of old cement and plaster from the stone walls. They are now clean and ready for pointing.

I took the opportunity to ask Sandro how stone buildings were constructed 200-300 years ago when the fienile was first built and before cement was commonplace. The stones in our walls had been beautifully laid by a craftsperson of old but there was a lot of dirt and dust between them and I wondered if the dirt had been placed deliberately or collected over time (a natural assumption in a farming region).

Sandro explained verbally but also visually in the manner of a man who is used to working with his hands. We were crouched on the ground near his cement bucket. He leaned over, picked up a handful of tufa dust that had been dampened by recent rain. He moulded it in his palm much like a potter might mould clay before throwing it on a wheel. Then he slapped it down on the ground, smoothed it flat with a quick stroke of his trowel, then placed a stone on it. This "glue" was nicely sticky and would obviously be effective for many years. I remembered the mud bricks that I had previously found amongst the stones in our walls.

I continue to be fascinated by the traditions and resourcefulness that this old building and our skilled muratore share with me.

Our buildings surround me in natural materials, colours and textures. I smell the cool of the stones, the mud of the dirt and the spice of the wood. Our land encases me in explosive shapes and colours. I see new tender leaves emerging and smell the perfumes of blossoms and bulbs.

I quite simply love the "earthiness" of my life here... 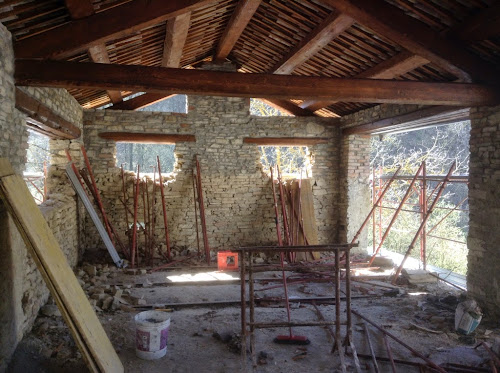 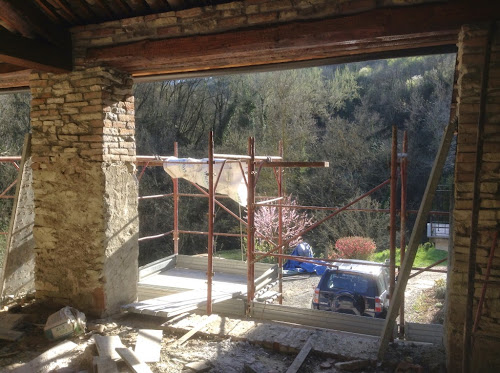 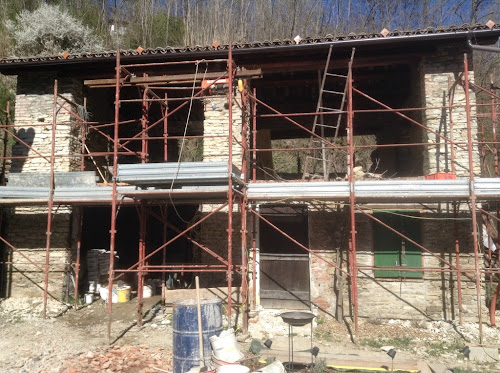