I woke slowly yesterday morning. The sky was lighting up and rumbling outside the bedroom window and the forecast promised a day of rain.

When I eventually made it to the kitchen, I took the opportunity of a wet day to phone my parents in Australia.

We were chatting for a while before Mum asked how the weather was.

"Oh it's going to rain all day...and there is lightening and thunder outside at the moment", I said, taking a quick glance out of the window.

But what I saw was a very pleasant surprise...it was snowing!

"Ooh Mum! It's snowing!" I cried as I leaped off my chair.

Snow always makes me cry. Literally. I suspect this may be because I come from "the sunburnt country" and view snow as a gift from the heavens.

I spent the next few hours doing nothing much because snow is such a dreadful but enjoyable distraction. I posted the snow news on Facebook. I stood at the window watching the snow. I wandered from window to window taking photos of the snow. I stepped outside in the snow.

Eventually I settled but not until we'd lost power.

Everything went out and off.

Hoping that it might come back on within a short time, we started a game of scrabble...a good old fashioned game of board scrabble. However, half an hour later, after a few turns and the power still off, we started to worry that a tree may have fallen across our power line... a constant threat when you live in a forest.

I texted a couple of friends in town to ask if they had also lost power but the texts wouldn't send because the atmosphere was too thick with snow.

So we ventured out to check the power line ourselves. We donned coats, scarves, hats, gloves and gumboots and set off over the neighbours fence and up the hill, struggling over mossy branches and slipping and sliding on the snow.

When we finally found the line it had not been cut by a fallen tree so we decided to wander into town to see if we could understand what had happened.

On the way, we shook the snow-laden branches that hung low over our driveway. After lessening the weight, we would step back before releasing them and watching them fling up free of the weight.

Town was quiet as it always is when it snows. People hadn't yet ventured out of their homes but had instead been waiting for streets and driveways to be cleared by snowploughs and shovels.

Power was on in the centre of town so we ordered aperitivi at our local cafe and warmed up over a lunchtime glass of the best local spumante (Contratto).

After the snow had stopped, we set off back home where we were relieved to find the power back on. The atmosphere had also cleared enough for my texts to send and for replies to be received. What precious friends we have in this little community! Both offered to phone the power company for us and one offered to come and get us if we couldn't get down our snowed-in driveway!

The 4km walk into and out of town had exhausted us. It's not easy walking in fresh 10cm deep snow.

Unfortunately, upon reaching home we had noticed a fallen tree balancing precariously in the branches of another tree and threatening to crush our well!

So, after a few minutes of drying out and warming up, we were again outside in our coats, scarves, hats, gloves and gumboots.

This time we were also armed with a chainsaw.

There followed a good 2 hours of solid activity.

Stu cut the branches that had already fallen into moveable pieces, which I then dragged to a composting pile.

This process continued until finally the tree rolled out of the other tree and down onto the snow-covered ground with a soft thud...a safe distance from our precious water supply.

I woke easily this morning after a deep sleep.

The snow was beckoning me again...only this morning it was white ice that glistened in the morning sun... 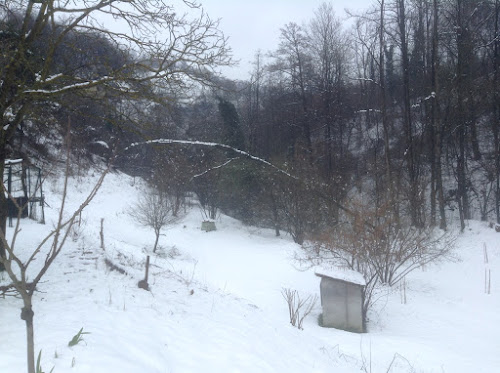 Above: The fallen tree balancing in the branches of another tree 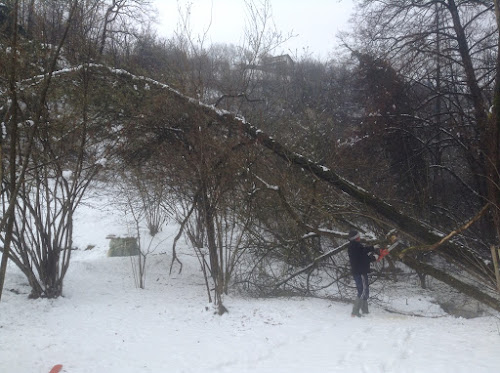 Above: Stu cutting the fallen tree with the chainsaw 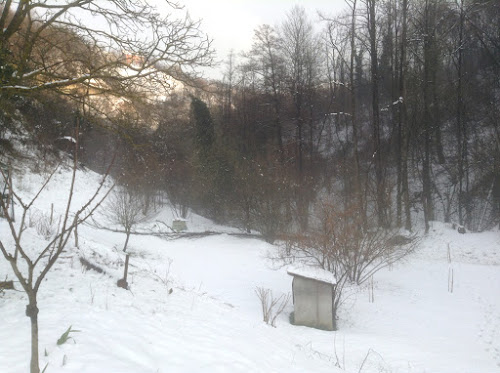 Above: The fallen tree on the ground