Just when we thought we had been humbled enough, these Papua New Guineans humbled us again today. We were invited to a farewell afternoon tea by our team, which turned out to be a truly blessed event soaked in genuine emotion. The entire team of 30 nationals gathered in our small conference room. No expats had been invited. Deliberately. Trays of hot and cold food had been discreetly deposited on the conference room table a few minutes earlier. When we entered, we were met by the aromas of fried chicken, sausage rolls and chips and the colours of filled sandwiches and fruit. Up one end of the table sat a cake the size of a european pillow! The icing on the cake read "best wishes to catherine doyle and stuart whyte", sweetly but oddly formal. My team leader Ellie, who was so shy that she couldn't speak at a meeting when I first arrived a year ago, made a beautifully brave and genuine speech. She talked about how I had taught them about time management and how Stu had brought them fun. She broke down a couple of times but waded through it in a massive display of courage and respect. Stu made a speech, then I made a speech. Then we were given 2 large gifts: a framed collage of 3 photos of the mine/town and a hardcover book about the Min tribe of the area. A quick flick through the book told me that the local peoples had not seen Westerners until 1968! They really were unknown to the rest of the world until I was 3 years old!? While others looked through the book, I found myself distracted by thoughts about how these people had been thrust into the modern world because of the greed of the modern world. There is something deeply disturbing about their exposure and I wondered if it really has been good for them. I was brought back to the present by Ellie inviting the rest of the team to bring their individual gifts forward. There followed a procession of team members, each endowing us with handcrafts from their local villages and regions. There were carvings from East Sepia, woollen Bilums from the Highlands and traditional bark Bilums from the local Min tribe villages. They were all explained to us ("this is a bark Bilum from the village where my wife comes from" and "this woollen Bilum was made by my friend in my village" and "my people in East Sepik are the only people who make carvings in PNG"). It was simply beautiful and beautifully simple and each gift will be treasured because it was given with a proud and very open heart. 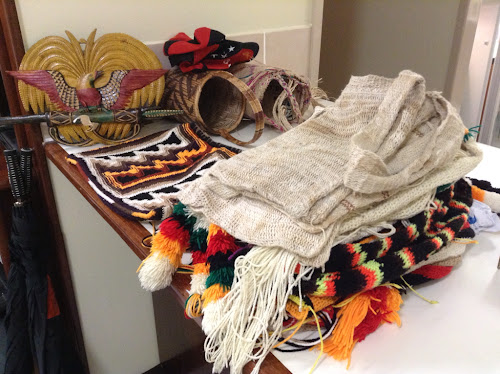