Hovering around our lavender

The life we have here in Italy is precious.

We are often reminded of the vast differences between Italy and Australia, as nature is always revealing something new to we foreigners.

Our little valley is protected from the vines above us by a thick forest, which means that our environment is free from any chemicals that may occasionally be used in the vineyards.

This purity means that we host an amazingly diverse collection of birds and insects.

At dawn and dusk, we are woken by birdsong which reminds us to appreciate the new day. During breakfast, we sit and watch the birds as they hop around our grass, finding insects and items for nest building. At night, we turn off our lights and venture outside in the pitch black to see the lucciole (fireflies) that light our valley. During the day, we watch vast numbers of bees as they hover around our spring wildflowers and lavender.

This is how we live our days normally...but sometimes nature reveals something new and special to us...and today was one such day.

We were outside with some friends when we noticed a strange humming noise coming from our flowering lavender.

Closer inspection revealed a very unusual insect, one that we hadn't seen before. It was large and furry and had a very long proboscis. Its wings were flapping so fast that it was able to hover above each lavender stem much like a hummingbird.

We watched this beautiful creature hover and hum from flower to flower until our friends left and the heat sent us indoors, where an internet search revealed that our new little friend was a "bee moth" or a hummingbird hawk-moth.

Another new experience for we foreigners...

"The hummingbird hawk-moth has a long proboscis and its hovering behaviour, accompanied by an audible humming noise, make it look like a hummingbird while feeding on flowers.

It is distributed throughout the northern Old World from Portugal to Japan, but is resident only in warmer climates (southern Europe, North Africa, and points east).

The bee moth is a strong flier and can be found virtually anywhere in the hemisphere in the summer. However it rarely survives the winter in northern latitudes (e.g. north of the Alps in Europe).

It flies during the day, especially in bright sunshine, but also at dusk, dawn, and even in the rain, which is unusual for even diurnal hawkmoths. It has a relatively good ability to learn colours.

It is highly active even when temperatures are high, and thoracic temperatures above 45 °C have been measured. This is among the highest recorded for hawk-moths, and near the limit for insect muscle activity.

The hummingbird hawk-moth can be easily seen in gardens, parks, meadows, bushes, and woodland edge, where the preferred food plants grow (honeysuckle, red valerian and many others).

Adults are particularly fond of nectar-rich flowers with a long and narrow calyx, since they can then take advantage of their long proboscis and avoid competition from other insects. They are reported to trap-line, that is, to return to the same flower beds at about the same time each day." 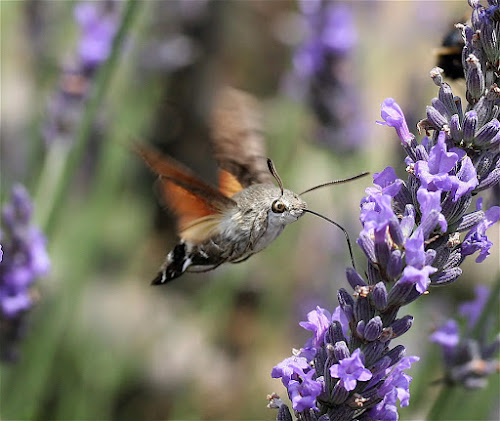