One early morning this month, I heard a scrapping noise outside. I dived out of bed to look out of the window where I saw two animals leaping and jumping around my lavender plants outside the front fienile window. They were beautiful to watch. They leaped with the slow-motion grace of a circus trapeze act.

On closer inspection, I realised that one was trying to catch the other. I continued to watch as the larger animal finally caught the smaller animal before crouching down to wait for its prey to cease struggling. When the larger animal stretched up, I got a clear view of its long body, bushy tail, cat-like face and white neck.

It was in these few short seconds that I realised that the captured animal was a dormouse....but I had no idea what the other animal was! I had never before seen such an animal in my life!

It turns out that this beautiful, graceful specimen is a pine marten!

Our neighbour tells us that it is a wonderful thing to have a pine marten. Apparently these animals hunt and eat dormouse and rats so they keep vermin populations down.

Indeed, this spring we have had far less vermin in our roof and shed than usual...and we've been noticing some unusual excrement around the place that contains cherry seeds!

"The pine marten...is related to wildlife such as the stoat, otter and badger. Because de-forestation and hunting significantly reduced its population in the 19th century it has been classified as a protected species in Europe since 1992.

The adult pine marten is about the size of a domestic cat and has a long tail that can be half the length of its body. It has a rich fur coat, typically dark brown in colour and a distinguishing creamy-yellow throat patch.

Pine marten require forest or scrub habitat to exist in an area. They are adept at climbing trees as they have powerful non-retractable claws. The species is primarily active at night and individuals live in territories that can vary in size from 60 hectares to 430 hectares. Life expectancy can be up to 10 years, although the majority of individuals are unlikely to survive past 5 years in the wild.

Pine marten are solitary and adults avoid contact with each other throughout most of the year.

The species only breeds once, with mating occurring in early summer between adults that are at least 2 years old. Fertilised eggs are not implanted in the uterus until the following January ("delayed implantation"). In March or April, 2-3 kits will be born and they will stay with their mother until they are between 6 and 16 months old. 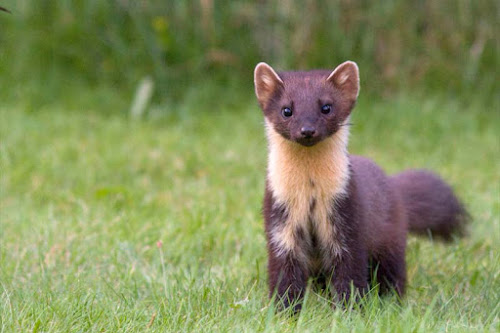 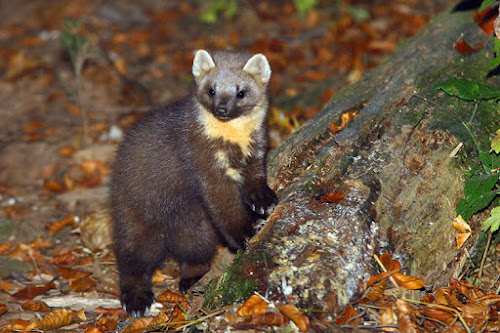