I've been ranting for some time about the amount of rain we've had this year. The higher level of moisture is now creating a cold humidity that is hanging around us in the form of thick deep wet fog.

When this happens, Europeans tell you to go up. Up above the fog.

So this week seemed a perfect time to visit the Christmas market at Govone, a small hilltop town that is only half an hour away by car.

"Due to its proximity to trade routes Govone has always had a strategic importance for the rulers of southern Piedmont. In the 10th century AD it was a fiefdom of the Solaro family of Asti until 1792, when it became a Savoy possession after the male Solaro line became extinct.

We had invited two friends to go with us and we needed all four pairs of eyes to make it safely through the fog to a large carpark at the base of the Govone hill. It is from this carpark that chartered coaches carry people up and down the hill while the popular Christmas event is on.

In our excitement we parked quickly and dived onto the first of several coaches waiting at the carpark. After the coach started moving we realised that there had been no signs confirming that the carpark was in fact the Govone Christmas market carpark. A few tense seconds followed during which we wondered if we were going to Govone at all!

Our concerns were allayed when we recognised an appropriate level of seasonal joy in our fellow passengers and felt the coach winding its way slowly uphill.

The road was typical of the region: narrow with steep sides. As we climbed higher and higher I hoped that we might break through the fog.

We didn't...but what I saw when we arrived made me forget the fog.

The Christmas market is set along a wide tree-lined walkway which starts at some lovely old gates, moves through a park and ends at the castle. The walkway is lined with little wooden alpine-style huts which are full of crafts by local artisans and produce from local farms.

Our first stop was lunch which was provided by the Govone Pro Loco in a huge covered area close to the market. The 4 course meal consisted of Insalata Russa, Pasta al Pomodoro, Polenta e Salciccia and Crostata di Marmellata. A glass of red wine gave us the warmth we needed to leave the temporary restaurant and embrace the market fully.

We were not disappointed and spent hours walking around, appreciating and tasting. The market had intimacy and warmth despite the weather and was very well organised...so well organised in fact that the fog lifted slightly when we reached the castle!

But only for a few minutes... 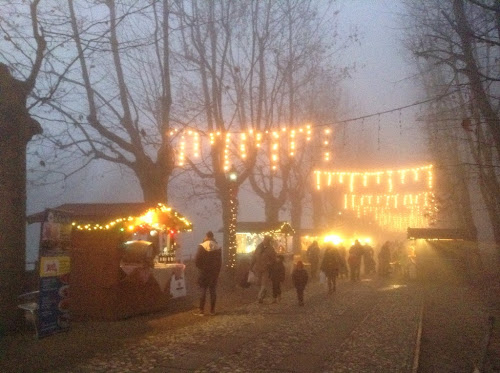 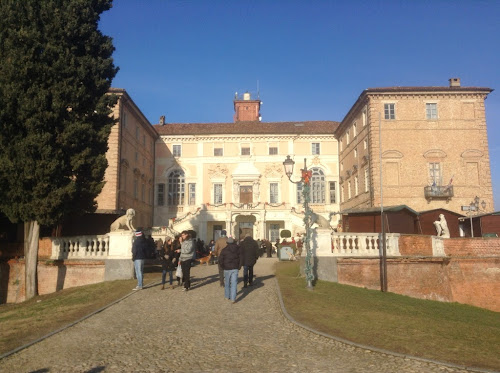 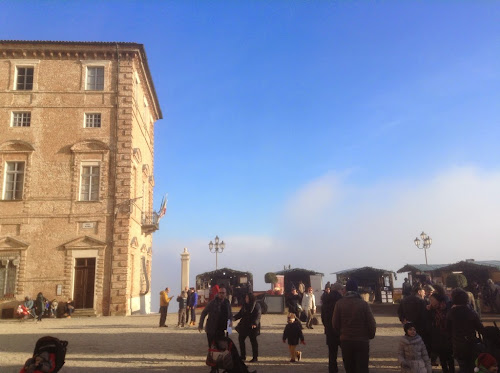 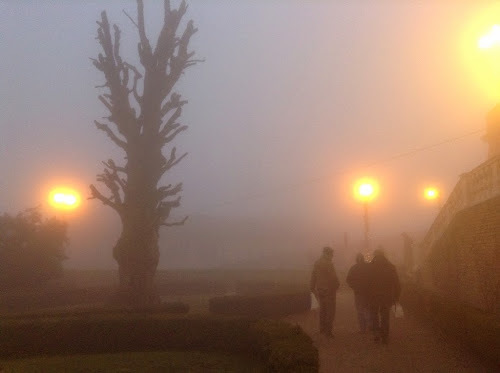