A gift from nature and a kind hunter

The day had smothered us in thick fog from dawn to dusk.

We had been out all afternoon and were opening our barrier to enter our property when we spotted a man and his dog walking across our misty apple orchard.

We have seen this man many times before. He wears the garb of a tartufo hunter: trousers, jacket, hat and gumboots. Clothes to protect against the damp. His dog also has the appearance of a truffle hunter. It has a loping stride, a nose that is constantly in touch with the ground and an excited and expectant air about it.

We had just closed the barrier when we heard the man call to us.

As he approached our car, he put his hand in his pocket and pulled out a black truffle that he'd just found in our valley. We took the little hard black lump from him, held it, smelled it, congratulated him and returned it.

My nose was still tingling from the aroma of the truffle, a complex mix of garlic, mushroom, compost and earth, when the man gave it back to us with instructions to wait 2 days before eating it!

He smiled and moved off amid our shocked thankyous and goodbyes.

We were left standing in the fog and mist holding a precious 20 gram piece of nature that will give us an exquisite sensory experience when we shave it over fried egg on the weekend...

"Truffles (tartufi) are related to mushrooms. They have a system of root-like structures but unlike mushrooms never emerge from the surface. Instead truffles are formed below the soil close to a tree's root systems and are the "fruit" of another fungus/tree relationship. The fungus that makes truffles can only survive in certain soil conditions such as those created in stands of oak, beech, poplar, birch, hazel, and pine.

Once attached to a root, the fungus will produce one truffle per year, with each type of tree lending a distinctive aroma and flavor to the truffle.

Truffles are usually too expensive for most consumers, except in parts of Northern Italy where they are a key ingredient in local dishes. They are harvested using dogs or pigs in a time-honored tradition. In Piedmonte and Umbria, harvest season is a time of celebration for both truffle harvesters (trifolau) and the towns that host truffle festivals.

The black truffle (tartufo nero) is found in Piedmonte, but also as far south as Umbria. Tartufo nero can withstand the stress of cooking and is often found incorporated into sauces, or spread for bruschetta or crostini. Black truffle omelets are a favorite of Assisi and they can also be sliced raw and served with carpaccio or bresaola." 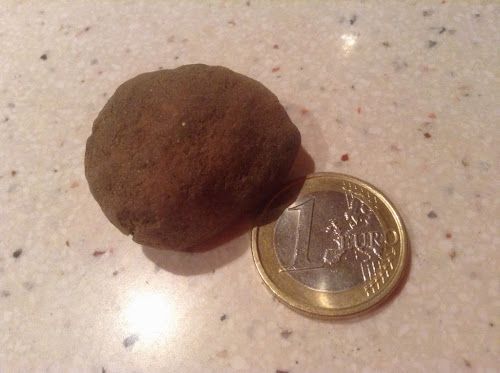 Above: Our little piece of flavour