But he did. And we are suitably inconvenienced.

Regular readers will know that this tends to be a regular event for us so we set our usual emergency plan into action. Stu dashed out to turn the water off while I made a desperate call to our plumber, who promised "Escapado!". I was sure that he meant he would escape from his current job urgently but when he still hadn't arrived two hours later I wondered if he had meant he was going to escape from us!

We had spent those two hours on our hands and knees in the bathroom, Stu jackhammering a space around the broken pipe to enable Lilo to repair it, me bailing the water out of the bathroom like a desperate sailor in a storm.

Despite our concerns over whether or not Lilo would actually arrive, dark was just descending on our newly cold house when we saw the warm lights of a vehicle coming up the valley.

Lilo looked tired (frustrated?) when he entered the house to view the damage. He walked around, turned valves on and off, cut out a section of the damaged pipe then announced that he would return tomorrow afternoon to repair it.

We waved him off feeling relieved that he had come and hopeful that he would return.

But I thought afterwards that we had probably looked more positive than we felt; inside we were two shipwrecked sailors tired of the rough seas that continue to batter us in our renovation efforts... 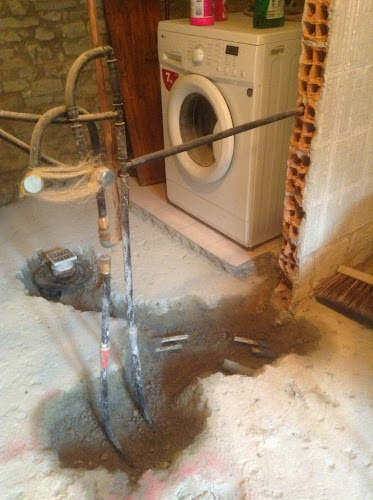 Above: The labyrinth of tubes, pipes and drains under our bathroom floor