I have recently discovered the beauty of copper.

Yes, I know it requires polishing but at this early stage in my appreciation of copper I am still finding this enjoyable.

So I was very excited when a special English friend gave me her old copper kettle yesterday. She had treasured the old kettle for at least 40 years and, although she is not sure how old it is, she believes its dents and holes probably make it "a lot older than that"!

"When tea first came to Britain in the second half of the 17th century, it was a luxury only the wealthy could afford.

But the price steadily declined during the 18th century and took a sharp dip in the 19th century when the removal of importing monopolies opened up trade with the Orient. By 1840, tea was served above and below stairs.

The wealthy bought kettles made of silver but the poor used copper kettles because they were cheap but still bright and an excellent conductor of heat.

So this little piece of history is now a treasured member of my collection and shall be regularly massaged with love...and a little polish, of course... 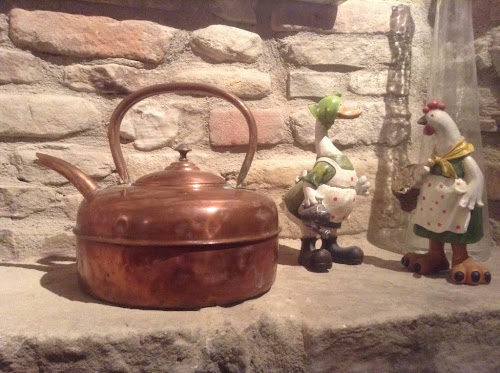