There are things that go bump in the night in our chimney! Stu's chair is close to the fireplace and every evening there is a clamour far too close to his chair that causes him to jump out of his seat.

These beasts that terrorise us in the night are ghiri (otherwise known as dormice). They are a cross between a squirrel (bushy tails) and a possum (big eyes) and are really very beautiful.

This morning we found further evidence of the creatures that haunt us.

We'd woken early and headed downstairs for breakfast. Our spoons were in hand and ready to plunge into our porridge when I heard a noise.

In response I received a tirade of abuse about how I'm always finding things wrong and imagining noises. But I was utterly confident that the noise I'd heard was real and new...and very close.

After a few spoonfuls of porridge I heard the noise again. Before insisting there was a noise and risking another tirade, I analysed it. The noise was inside the house and it was moving plastic around.

The next time the noise came Stu heard it too. We both dived up, leaving our porridge to congeal in our bowls. He headed outside while I headed into the downstairs bathroom, sure of my earlier analysis.

In the bath, along with bits of pipe and plastic bags of fittings associated with the new septic system, was a small furry creature.

Always worried that small things will climb up his leg, Stu put his own safety first and ran to the shed to get a ladder. He returned and positioned the ladder so that he could see inside the bath from an elevated position. Picture big man trembling on ladder.

When he peered over the side of the bath, he saw a bushy tail and announced from his podium that it was a ghiro (always a good thing when the only other creatures of similar bearing are mice and rats!).

Our next ideas involved brooms and buckets.

Our final ideas were completely in sync. We would wait for our friend to arrive (who was due within the hour).

We locked the creature in the bathroom and ourselves in the kitchen...and waited.

When our friend arrived he put on a pair of leather gloves, picked the beast up and released it outside.

Simple. No ladders. No brooms. No buckets. No panic. 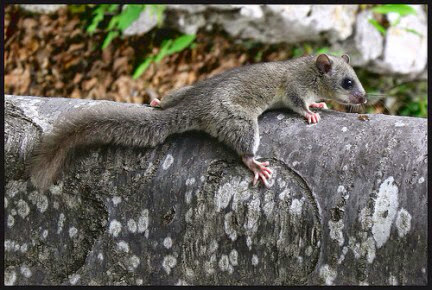