This week we had a few rainy days which delayed work.

A giant tarpaulin had to be stretched over the roof structure in order to protect the wooden beams and the half-finished earthquake ring.

Despite the cold and wet, Sandro continued to arrive alone and work under the tarpaulin.

He had been making a bit of destructive stone-like noise on the upper internal scaffold so I went up to see how he was busying himself. To access this area, you need to climb a ladder and as I arrived on the scaffold I was surprised to see how protected and peaceful it was up there under the tarp. The tarpaulin shielded the area from the wind and made the dismal damp precipitation sound like gentle joyful raindrops on a tent!

Sandro had spent a few hours creating two holes in the end wall which will ultimately be windows. He had been gathering the rocks from these holes and placing them closer to his next area of focus: the earthquake ring at the other end of the fienile.

The absence of rain the next day saw the complete team arrive with renewed enthusiasm. They spent the day finishing the earthquake ring, the stonework around the ring as well as pointing the internal walls.

A muratore in action is a fascinating thing to watch.

It is the stuff of history, tradition and art.

Sandro has few tools and does everything by hand. A string line, a bucket of cement, a trowel, a strange blade that looks like an overgrown meat cleaver and a hammer. He works quickly, picking up a stone and whacking it with the meat cleaver to shape it for the space he has to fill. Like an artist, he rarely looks twice at the space he has to fill; it is as if he takes a mental photograph of the space and then focuses on the stone. It seems that the shape he creates is never wrong. When he's happy with it, he slices a piece of thick oozey cement out of his bucket, throws it on the top of the wall and smoothes it quickly with a deft movement of the wrist. Then he places his newly shaped stone on the cement and hammers it gently so that it is level with the rest of the wall.

While Sandro was doing this, another member of his team was pointing internal stonework. This is also fascinating. The cement is thrown at the wall, onto the stone and the gaps, then partially trowelled off. It looks awfully messy. But a few hours later, when the cement is partially dry, a wire brush is used to remove the excess and highlight the stonework.

Having tried to fill various holes in our stonework using my own form of stone masonry, I can confidentally state that it is impossible. I could never find the perfect stone to fit my space and spent more time carrying stones around than doing actually anything with them! If I was lucky enough to find the perfect stone, the cement I threw at the wall usually landed on the ground and if I was lucky enough to actually place a stone it usually fell out immediately. 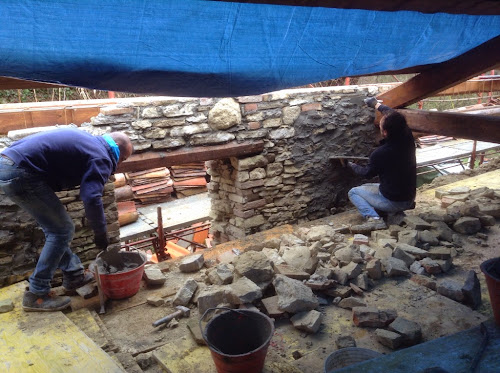 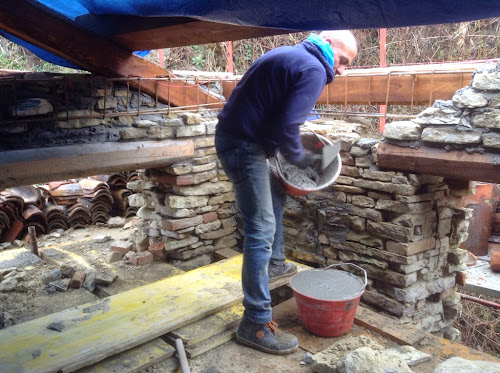 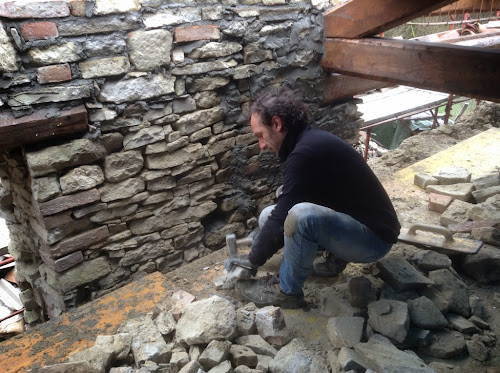 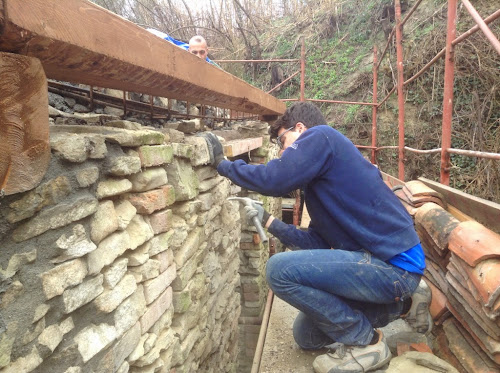 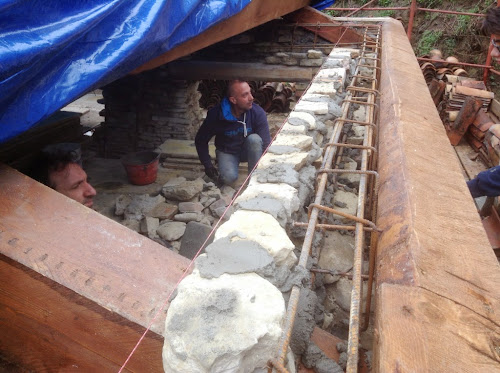 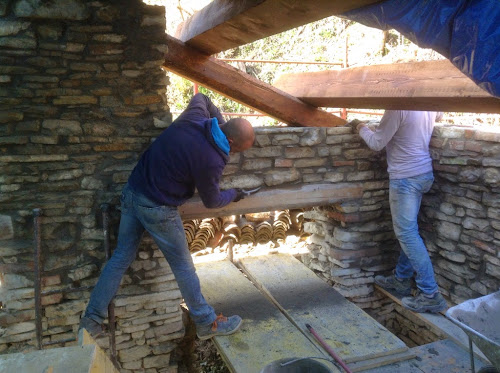