The lacework is up

The builder arrived early yesterday morning in a truck heavily laden with scaffolding.

Tomorrow he needs to erect scaffolding on the upper inside of the building.

Unfortunately we've been using this area to store all of the domestic and industrial rubbish that we've inherited or been collecting since we purchased the property.

The concept of living as a minimalist and leaving a small footprint is important to me. I pride myself on composting and recycling everything possible and it has been frustrating that I haven't been able to do anything with The Pile.

Just before leaving tonight, the builder raised the subject of the rubbish. Luckily he also mentioned "porta via" (take away) I latched onto the "porta via" immediately. He said he was happy to take it away as Canelli is well set up for recycling and he would ensure that it goes to the proper recycling location.

He loaded the plastic onto his truck late yesterday and will take a load of steel tomorrow.

Then we will be rubbish free...and the fienile will be completely covered by scaffolding...inside and out! 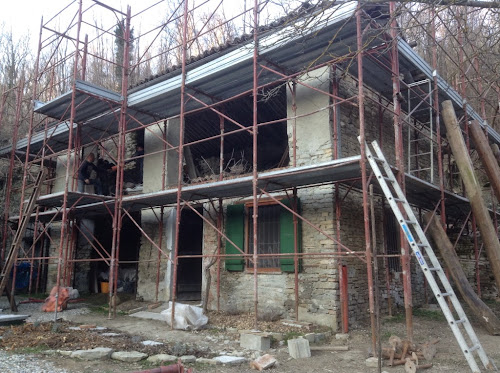