A container of sunshine

On a cold, damp and wet day, our 20 foot shipping container of sunshine arrived. We received a phone call from the mobile crew an hour before they were expected and rushed down the driveway to meet them. Down the street we came across a group of four men beside a truck carrying a 20 foot shipping container which looked a lot like the one they had packed outside our apartment in Australia. There was also a smaller boxy truck which was no doubt the transfer vehicle. They asked us to take them up the drive so they could see the state of the road. I had told them in Australia that we would need a transfer vehicle...and I told this crew again. However, it seemed that their hopes rested on getting the actual container up there, no doubt to avoid double handling everything. So we drove back up the driveway with two removalists in the back seat. The silence coming from the rear of the car was relatively comforting until they started to say things like "brutto", "stretta" and "mamma mia"! So it was back out to the road where there was much talking and waving hands until finally I gleaned that even the transfer vehicle was unsuitable. Therein commenced a process whereby they held long conversations with a neighbour who lives at the end of our driveway and seems to have a transport business. Then there were more conversations with a vehicle hire company in Canelli. Eventually, half of the crew went in search of a small van that they had managed to hire, while the other half reversed the truck carrying the container up to the neighbour's loading ramp. After about 1.5 hours, the small van arrived and transfer commenced. They managed to complete one trip before the team went missing. For an hour, we waited at the house, minds swirling with thoughts of our container sitting raw and open at the mercy of locals while a coffee was taken. However, on their return they announced that they had been offloading the bike with the assistance of the forklift owned by the neighbour! We dashed down the driveway once again to see if the battery was flat. It was. Stu took the battery out and we drove it home to charge it. There followed three further loads before the crew said their farewells in the early afternoon. A few hours later, Stu and I again set off down the driveway with what we hoped was a charged battery. It was. By close of day, the container was empty, the motorbike was secure and our treasures were stacked high in the rustico, to be opened another day.

Postscript: The following day, we delivered a large tray of pastries from the local Pasticceria to our neighbour in thanks for his "pazienza e assistenza". 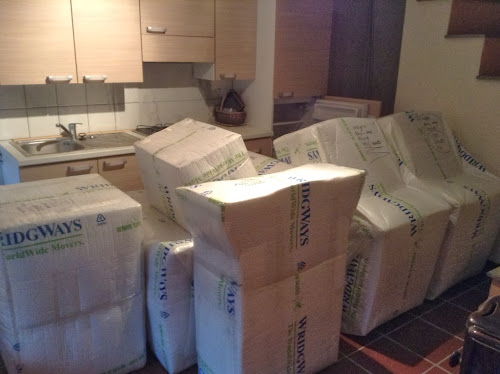 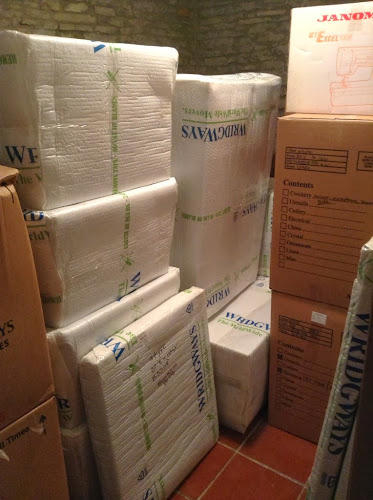