We were returning home from a visit to a hardware shop when we came across a car parked just off the little track which is our driveway. The car had a temporary sign in its window which said "attenzione battuta al cinghiale in corso". This meant that a professional wild boar hunt was underway. A little further ahead of the car, we could see a man in a hi-vis orange vest on the track. He was carrying a double barrelled shotgun and seemed to be extremely alert, listening and turning quickly in a nervous way. We turned off the engine and waited. By the mans agitated behaviour, it seemed that a beast was certainly barrelling down the track towards us. Suddenly the man spun around, and pointed his gun up the road. Seconds later, a cyclist sheepishly creeped around us. I wondered if he knew how close he came to being one of the 600 people who are shot by cinghiale hunters every year in Italy. The man visibly relaxed with this interruption and walked towards us. I explained to him that our house was up the valley and we were on our way home. He told us to proceed. Just around the first bend, we came across another car, again displaying the hunter notice in its window, and a hi-vis man poised with a gun. Still further along, we found a third marked car and two hi-vis men with guns. Suddenly, one of these men jerked his head in the direction of the forest and ran up the track, knees bent and upper body leaning forward poised for an attack. We turned off the engine again and waited. Nothing. The man returned and told us to proceed. As the car passed him, we heard him on his two-way saying that a car belonging to a local had interrupted the hunt. They had obviously been so close and the timing of our approach had ruined it for them. Our activity outside the house was slightly thwarted for the rest of the day, as we fully expected a boar to come charging towards us at any moment. 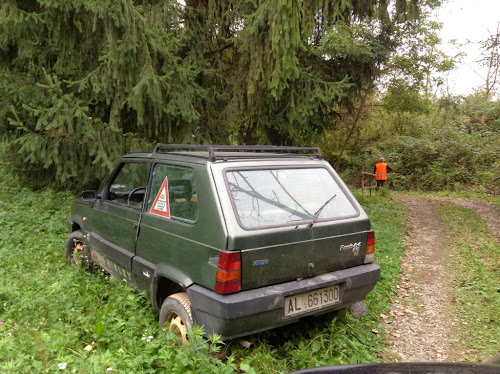 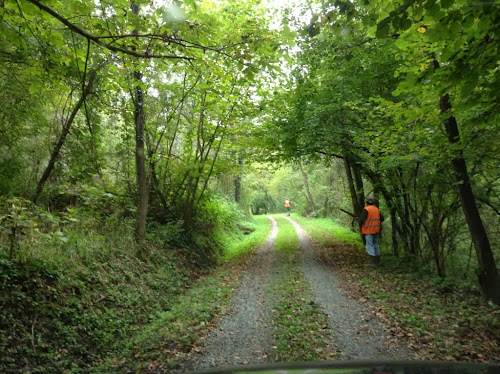