Among all the official traumas we are having, I can happily report that our three chimneys have been swept ready for winter! Last week, a friend mentioned casually that she was getting her chimney swept. This was something we hadn't even thought of! With memories of a chimney fire during our first winter still fresh in our minds, we dived on this poor friend. Two days later, a tradesperson arrived in a grey station wagon. Our first impression was "How can that car contain the things required by a chimney sweep?". But it did. We watched as he pulled out a box that contained the technology required to see inside the chimney, a selection of brushes, an industrial vacuum cleaner and an eight metre ladder. The chimney sweep himself was clothed in...well...black. He wore black overalls, a black skivvy, black boots, a black cap and a black beard (?). He proceeded to seal our three chimneys by covering them with plastic held on by masking tape. In the third room, the soon to be lounge room, there was a floor of rubble to avoid and no electricity. I faithfully held a torch for him in this room. Once this was done, he went back out to his car and lashed himself into a safety harness, grasped his stack of brushes and extended his ladder by the full eight metres onto the roof. He then climbed up, tied himself to the first chimney and proceeded to push brushes down it, adding extensions as he went. He grunted, coughed, snorted and spat every few minutes. At one point he yelled down to me "solo 2 metri di acciaio". Then he moved to the second chimney: "solo 2.5 metri di acciaio". The third chimney: "solo 2.5 metri di acciaio". As with everything we touch, these comments carried bad news. It seems that our chimneys do have stainless steel tubes but only for the first 2 metres or so. The remaining 4 to 5 metres is brick. When I quizzed him on the need to install stainless steel, he said it was not necessary as long as we have the chimneys swept every year. So, I guess this is not all bad news. He then climbed down and had a thorough wash in the bathroom (hair, face, neck, hands). We talked while he packed his car. I gleaned that he has been doing this work for 10 years and covers the whole of Piemonte. He explained that he is busiest in Autumn, then has virtually no work during Winter (unless he is called to a chimney fire). He suggested we book him again in Spring. When I paid him, he gave me his card and I read with interest that he also removes wasp nests...(see next posting). 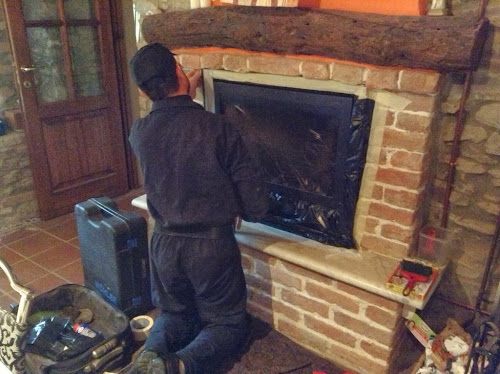 Above: Sealing the chimney in the kitchen 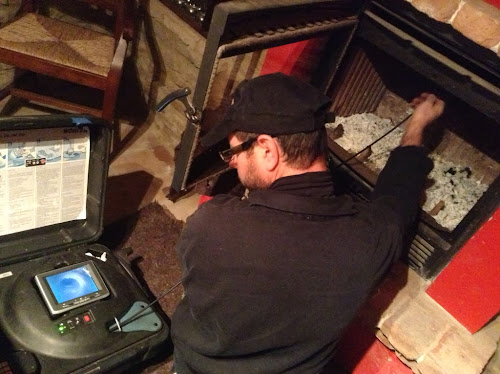 Above: Analysing the chimney in the dining room 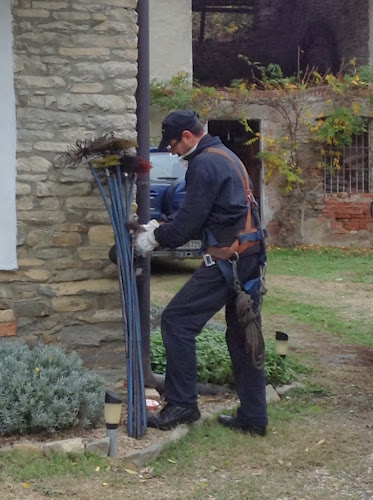 Above: Getting the brushes ready 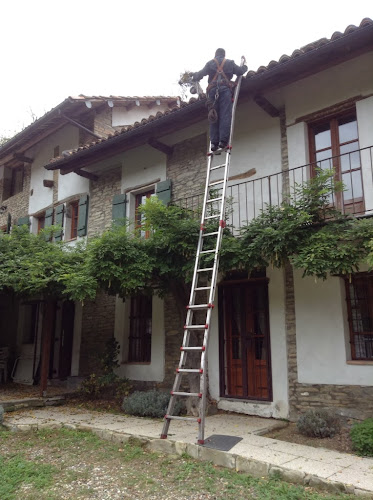