Not what we planned...but good anyway!

When we woke in our BnB this morning, mountain mist and low cloud awaited us. So we gave our planned trip to the Col du Galibier a miss and set off for Sestriere and Pinerolo instead.

Very soon the cloud had turned into rain but that didn't stop us finding a farmers market at a small town in the valley below Sestriere called Pragelato. We parked the car and walked under our umbrellas along a swiftly flowing river and past a ski jump arena that had been used in the Torino Winter Olympics in 2006.

Near the market we heard music...strange discordant metallic sounds that were not unpleasant. As we turned a corner we saw several small pens that contained cattle. Each of the incredibly healthy animals in these pens carried a thick leather collar around its neck from which hung a heavy copper bell. I had never seen such huge bells before and stood for a long time to watch and listen. When we finally entered the market, the first stall we came across was one selling these bells! Some were plain while others had colourfully decorated collars or painted bells. If I hadn't already seen them on the cattle I would have assumed that they were a tourist gimmick!

Other stalls were selling cheeses, honeys and salamis, while still others sold home-crafts made of slate, wood and dried flowers. All had a distinctive mountain or high altitude influence.

Further down the valley we drove through 4 villages that were festooned in coloured ribbon and bows. The buildings in Villaretto were draped in yellow, Balma in blue, Roreto in red and Casteldelbosco in green! We have no idea why...but if anyone can enlighten us it would be much appreciated! 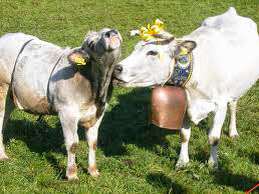