I neglected to tell you the most interesting (entertaining!?) part of our water testing experience yesterday...

Our chemist is located in a 4th storey apartment in the centre of Canelli. The rooms in the apartment have been remodelled somewhat to function as an office and a laboratory but the layout is still reminiscent of a home.

After giving us the results of our water test, our lovely chemist asked us if we liked alcohol. When you listen to someone speakIng in a foreign language, you often rely on context to help you imagine what they might be saying to you. In the utter absence of context for this particular question, I struggled to imagine hat he was asking...until I eventually decided he was definitely asking us if we liked alcohol.

He invited us into his laboratory.

We walked from his office, which contained old wooden furniture including shelves packed with books and paperwork, to the next room.

In the next room, which was once perhaps a bedroom in the apartment, we noticed photos of Canelli in the early 1900s on the walls, shelves and cupboards around the perimeter and large stainless steel tables in the middle of the space. On the tables stood rows of empty bottles of various colours, shapes and sizes. On the shelves there were other bottles containing clear, amber, green or brown liquids. Still more bottles stood on the floor and these contained swollen, half-submerged organic matter that floated ominously in their coloured liquids. Each bottle had a white homemade label attached to it.

We had entered a distillery.

Quite simply, these were the single smoothest liquors that we have ever drunk.

After a fascinating half an hour, during which we had felt like characters in an episode of Breaking Bad (our chemist was Walt!), we left slightly under the influence with a bottle of the world's best genepy secreted in my handbag... 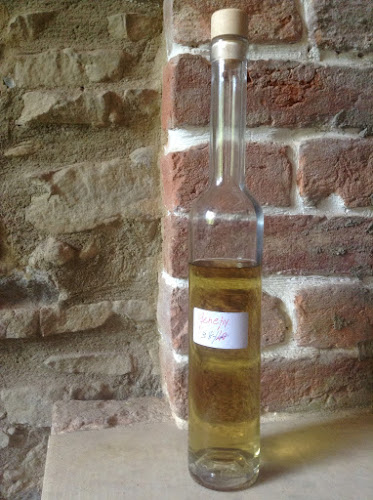