How can we trust each other when there are wild strawberries around!?

With the rain we received in early spring and an incredibly hot late spring, the jungle is claiming our driveway.

Over recent weeks, we've been observing invasive vines growing slowly thicker and heavier and weighing down the trees that line the driveway.

This week they started to hamper our ability to get the car through so something had to be done.

We are currently experiencing a heat wave and temperatures are hovering around the 38-40 degree mark. Since we can't be outside after 10am in this heat, we gathered our various garden tools and set off down the road to tackle the jungle before breakfast.

Several hours later, with breakfast long forgotten, our legs cut to pieces by blackberry bushes and sweat stinging our eyes, the vines had been clipped, cut and wrestled out of the tree tops.

Unfortunately they were still scattered all over the driveway and in the rising heat, we could barely summon the energy to rake up the mess and push it off the road. But somehow we persevered, eventually casting aside the rake to scrabble around on the ground and gather armfuls of dying weed instead.

On the way home we made a startling discovery: an extensive wild strawberry patch growing along the side of the road!

This created a renewed energy as we carefully picked two handfuls of these soft sweet organic treasures to take back home for a well-earned breakfast... 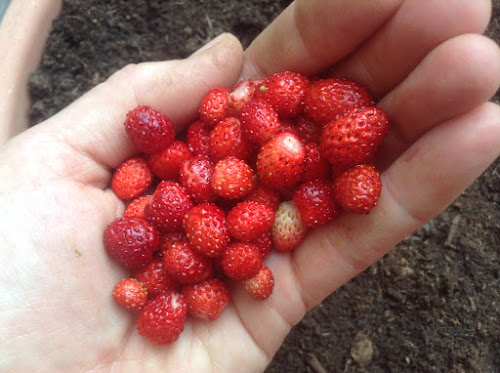