Our next big renovation...the downstairs bathroom

With the upper fienile renovation finished, the lower fienile awaits...but we're turning our attention to another more pressing job first: the renovation of the downstairs bathroom and the side door entry passage.

When we purchased the house, the previous owner had installed a strange collection of walls in one of the downstairs rooms. These walls created a separate hallway, laundry and bathroom but were maze-like and labyrinthine.

We don't like pokey so we've been on a mission to open the area up ever since.

First we removed a staircase nearby to make an alternative hallway, which we have been using as an entry passage. We also removed the pokey hallway wall and were left with a laundry and a bathroom that were slightly larger than they had previously been.

Then we had a vision!

We realised that we could open up the space even further by removing the wall between the laundry and the bathroom and making a single room for both functions. So we did. We also removed the toilet, bath and shower (which we wanted to re-position in the space) and lifted the tiles in the entire area (3 different types) to take the floor back to cement.

The project subsequently stagnated while we were distracted by the upper fienile and we've been living with a washing machine in a corner of a dusty room and a bathroom without amenities!

Last month, we turned our attention to thIs entire area again. The first task was to explain to the plumber what we wanted to do, which was no mean feat in itself.

The work included moving one radiator and installing another radiator, both of which needed to be connected to the caldaia (heating) ystem. We also wanted to move the bath/shower to one side of the room and install a basin, bidet and toilet on the other side. Finally, we needed to streamline the plumbing to ensure that the grey waste from the bathroom upstairs flowed as fast as it could given that it would join the downstairs waste system.

When the plumber came, there was a lot of animated discussion and wild gesticulation at pipes and walls before he spray-painted the concrete floor. These red lines marked the channels where the new pipes would be laid. Stu needed to jackhammer through the concrete to create these channels.

Stu dutifully jackhammered, which had to be performed carefully after he found live unprotected electrical wires within the concrete! Finally, with the destruction finished, we called the plumber back. There was more animated discussion and wild gesticulation and yet more spray-painted lines.

On his third visit, the plumber arrived with PVC and copper piping, connections and equipment. He spent the entire day disconnecting and reconnecting pipes within the channels. Then he left, telling us to concrete over the channels then call him again once we'd laid the new tiles.

Since the tiles in the bathroom, laundry and entry passage will be the same, we also want them to be at the same level. This has meant that Stu also needed to jackhammer up the old tiles and floor in the entry passage and level this space with concrete too.

We are now waiting for the concrete to harden in all 3 areas so that we can start laying tiles! 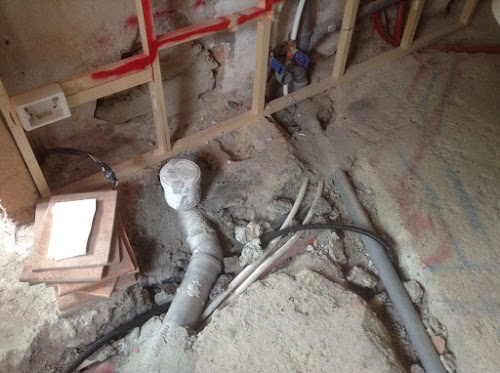 Above: The bathroom floor jackhammered up and new piping laid 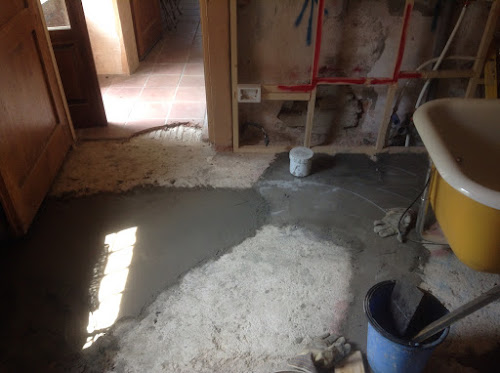 Above: The bathroom floor concreted over 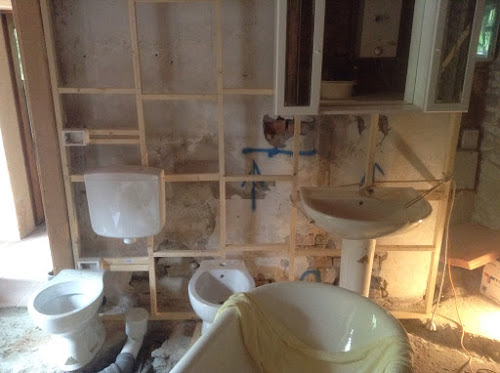 Above: A false wall installed which will hide the piping and electrics. This photo also shows the future location of the toilet, bidet and sink. 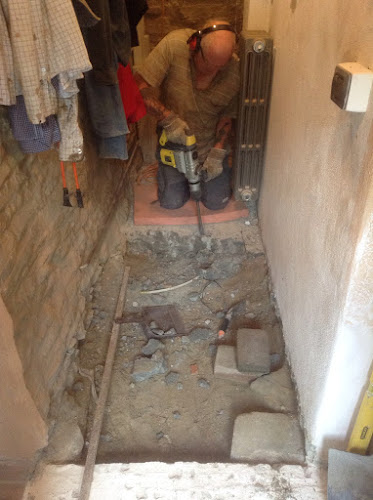 Above: The side door entry passage jackhammered up 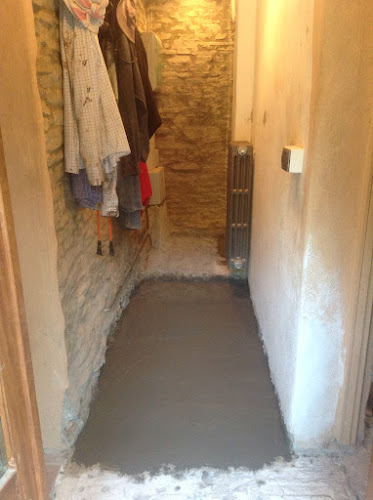 Above: The side door entry passage floor concreted over