The downstairs bathroom has a hard concrete floor!

My post dated 19 June 2015 regarding the renovation of our downstairs bathroom explained our initial progress. The plumber had been, a lot of jackhammering had taken place and we were waiting for the concrete floor to harden before we could progress with tiling.

While waiting, we've been using siesta to work out exactly HOW to lay our tiles.

Our plan is to re-tile the complete downstairs area of the house in the same tile as we use in the bathroom. The old tiles are well past their due date. They have lost their initial gloss (if they ever had one) and now absorb everything we drop on them. They are a terracotta colour which makes the rooms look small and also shows every bit of dust that we manage to walk in from our rural environment.

We purchased the new tiles about 6 months ago. They are large, rectangle in shape and sandstone in colour so will be fast to lay and will hide dust and dirt.

Internet searches told us that laying tiles in a diagonal pattern visually expands rooms. This is an important issue for us as our old rustic stone house has thick and very crooked walls as well as multiple small rooms rather than large open areas. We also asked my draftsperson father to provide comparable layouts so that we could better visualise the various looks and wastage rates.

In the end, we decided a straight border around the perimeter of each room and a diagonal pattern in the centre would work best so we started planning the bathroom first. We looked at the walls with critical eyes for the first time. They weren't straight or even at ninety degree angles to any other wall! We had a long (sometimes heated!) discussion about which wall one sees from the doorway and which wall should be the one that takes the uneven edge of tiles. Then Stu started measuring walls, depths and angles with string lines, asking me to hold one end of a piece of blue string while he held the other end then flicked it to leave blue chalk marks on the concrete. It all looked very naiive but it must have been effective because Stu used this technique to work out where the border would go, which tiles would be cut to fit the crooked walls and on what angle the diagonals would be laid.

Once the mathematics had been done, it was my turn. I am responsible for the visual check. We set out about 20 tiles at key points then I stood in various locations viewing the tiles from within the room, from the doorway and from the adjacent room.

It "looked" right so we have now started laying tiles.

For way too many months we've been without a downstairs bathroom. We've had to negotiate multiple doors, corners and stairs every time we wanted to go to the toilet!

This has made us think twice about entertaining because of the inconvenience to guests...but a future which involves an easily accessible bathroom now beckons... 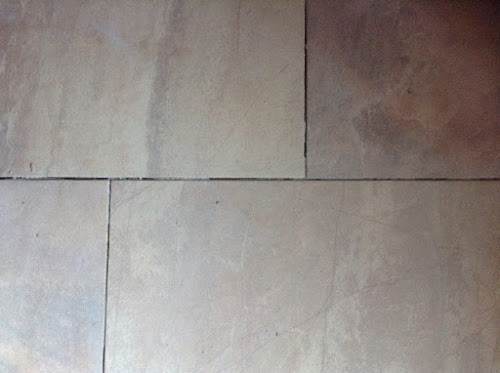 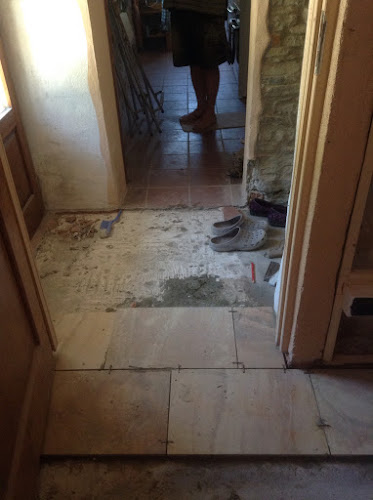