A few weeks ago, I mentioned several building projects that we had received quotes for. We have decided to proceed with three of them: roof (realignment of slipped tiles on the main house and new roof on the rest of the house), construction of voltini (ceiling for the lounge room) and creation of an atrium and new staircase (at the front door). We have been incredibly busy preparing for the builder, who will commence work tomorrow. Stu has demolished the old ceiling in the lounge room while I have been removing rubble and cleaning bricks for the new ceiling. Today, we decided we should check the state of the stone wall that will be exposed as part of the atrium and staircase project. When we peered through the door that currently gives access to the attic, we found an ugly mess of cement had been thrown onto this original stone wall. Cleaning this off suddenly became todays job. Stu spent two hours with a pick and hammer and jackhammer while I shovelled the rubble into a bucket and carried it downstairs to the rubble pile (10 loads). Since this same wall carries the kitchen chimney, we were surprisingly warm despite the 8 degree temperature outside. Opening up this area will mean that the heat from the kitchen fireplace will be directed into the house rather than lost to the attic. During our excavations, we found that there had been a chimney fire at some stage as some of the chimney bricks are burnt. As with all things we find here, we will embrace this as part of the houses history. 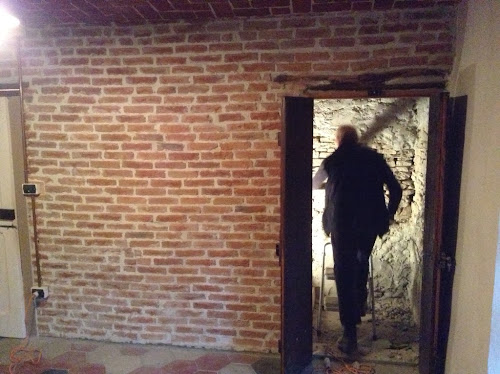 Above: The brick wall that will be removed to expose the original stone wall behind. 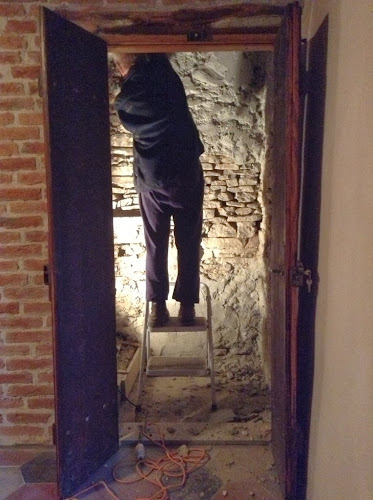 Above: Stu hard at work